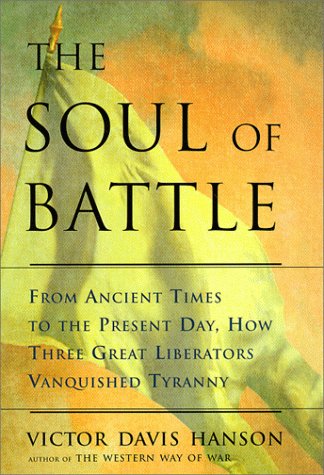 The Soul of Battle: From Ancient Times to the Present Day, Three Great Liberators Vanquished Tyranny

Hanson, a scholar of classics as well as of military history (The Western Way of War), depicts three great armies under three great captains: Epaminondas of Thebes, William T. Sherman and George S. Patton. Their enemies--respectively, Sparta, the Confederacy, the Nazis--had been considered unstoppable. Yet they were defeated not by professional soldiers but by citizen-soldiers turned quickly into ruthlessly efficient fighting forces. It is no contradiction, Hanson argues, that democracies can produce such fierce killers. On the contrary, democracies, he writes, are uniquely suited to quickly mustering forces, imbuing them with ""near-messianic zeal... to exterminate what they understand as evil, have them follow to their deaths the most ruthless of men, and then melt anonymously back into the culture that produced them."" To accomplish this, he says, a democracy requires both a clear cause and a leader of genius. Hanson presents his three generals as examples of such leaders. Each man led forces seeking to liberate others, whether serfs in Sparta or slaves in the American South or Europeans tyrannized by Hitler. Hanson's thesis, however, is not self-evident: it is still a matter of debate, for example, whether Epaminondas fought to liberate Sparta's serfs or, less idealistically, to strike a decisive blow against Thebes's mortal enemy; similarly, the Union did not fight the Confederacy solely or even mainly to liberate the slaves (and the Confederacy, too, was made of citizen-soldiers who had, if anything, more devotion to their cause than most Union fighters). Nevertheless, Hanson delivers an eloquent reminder that democracies under great captains, facing enemies challenging the essence of their cultures, can make war at levels beyond the worst nightmares of their warrior opponents. (Oct.)
close
Details