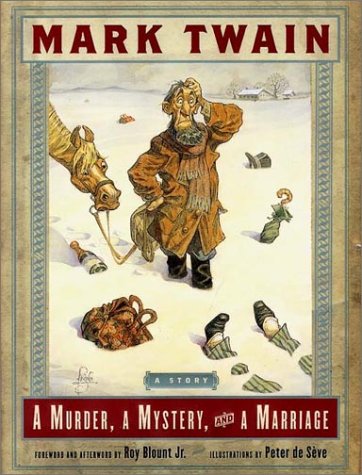 A MURDER, A MYSTERY, AND A MARRIAGE

The , to great hoopla, recently resurrected an 1876 Twain manuscript; in this slim volume, it is reproduced, along with insightful comments from Roy Blount Jr. The question is, do we have a forgotten masterpiece? Or is the playing a game like the Duke and the Dauphin's Royal Nonesuch in , inflating expectations and leading up merely to a diddly stag show? In Twain's story, a Frenchman is found in a field of snow outside a small Missouri town. He refuses to explain how he got there, but lets it be known he is a Count Fontainebleau. He courts Mary Gray, the town beauty. Mary was intended for her true love, Hugh Gregory, but her father, John Gray, scotched the marriage. David Gray, John's brother, has threatened to drop Mary from his will if she marries Hugh, whom he dislikes. Then David Gray is murdered, and Hugh Gregory is convicted of the crime. Count Fontainebleau is on the verge of marrying Mary when there is a sudden turnaround of events. Twain's original idea was to give a skeleton plot involving a mysterious stranger and a murder to other writers (including, bizarrely, Henry James) and have the publish all their versions—a scheme presumably engineered to show Twain's superiority. This never happened. Twain's story is, admittedly, a trifle. Roy Blount directs his comments to the reason Twain put aside to write it, leading him to speculate interestingly, albeit somewhat irrelevantly, on Twain's life and politics, which were shifting in 1876. Altogether, this Twain curiosa is less interesting in itself than for what Blount makes of it.