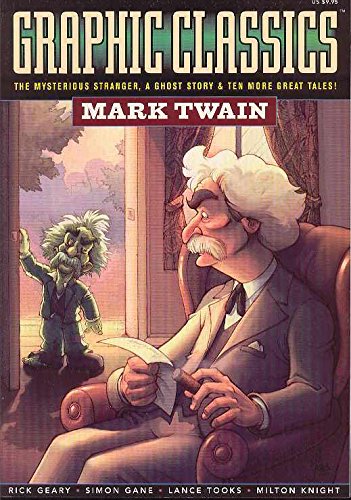 With a terrific lineup of artists and unbeatable material, Pomplun has assembled a collection of Mark Twain's work that should delight graphic novel fans and anyone seeking to boost their general cultural knowledge. The stories collected here are, of necessity, taken from Twain's short works, and if not every single word has made it into these comics adaptations, there is still an abundance of the great man's rhetoric, which should satisfy all but the most exacting readers. The book begins with Twain's 70th birthday oration, delivered in 1905, and continues with one of Twain's later works, "The Mysterious Stranger," a dark morality tale set in 16th-century Austria. The mood lightens with "How I Was Sold in Newark" and "The Celebrated Jumping Frog of Calaveras County." Other yarns include "A Ghost Story" and "A Dog's Tale." Interspersed are shorter pieces: "Ode to Stephen Dowling Bots, Dec'd" (excerpted from ), a short discussion of a 19th-century fraud entitled "P.T. Barnum and the Cardiff Giant" and a superbly tongue-in-cheek advertisement for "A Curious Pleasure Excursion," in which the public learns Twain has leased a comet and is ready to take patrons on a deluxe ride through outer space. With over 20 different artists interpreting Twain's work, illustrations range from discreet drawings accompanying a page full of text to boffo spreads where characters cavort through the tale. Particularly charming is the collection of images accompanying Twain's practical "Advice to Little Girls," recommendations as timely now as when they were written.