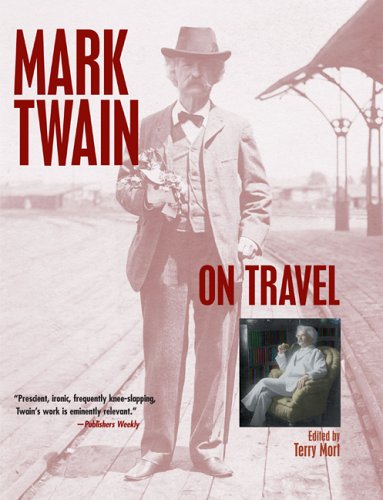 Selections from Twain's five travel books (about excursions to the American West, the Pacific Islands, India, the Middle East and Europe) spotlight some of his choicest writing, though they lose his rich, digressive context. With the success of in 1869, Twain churned out travelogues for much-needed money, and refined the successful formula of pitting gullible middle-American protagonists against hardened high priests of the world's culture. Mort ( ) presents Twain's writing by themes, rather than chronology, starting with a boy's ambition to pilot the Big River of his youth, the Mississippi; Twain claims in one famous selection from that he took his nom de plume from an ancient mariner who could best the gossiping fledglings by his reminiscences. Heading west into Nevada, Twain's young, unsuspecting narrator is swindled into buying a "Genuine Mexican Plug," among other dusty adventures. A journey to Australia (from ) allows him to ponder racial genocide by the white squatters in Aboriginal land; while observing the caste system of India ("With them, all life seems to be sacred except human life") evokes childhood memories of the scarring injustice of Southern slavery. Prescient, ironic, frequently knee-slapping, Twain's work is eminently relevant.