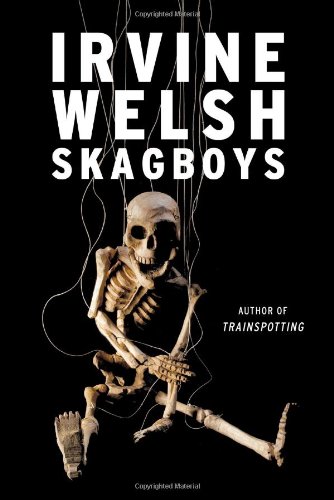 Built upon 100,000 words set aside in the process of writing Trainspotting comes this prequel set in gritty early ’80s Leith, Edinburgh. The familiar voices of Mark “Rent Boy” Renton, Simon “Sick Boy” Williamson, Danny “Spud” Murphy, Frank Begbie, Matty Connell, and Alison Lozinska crowd the pages of this sprawling narrative. Mark, who goes off to Aberdeen University, plans a rail tour of Europe with the girl of his dreams, Fiona Conyers, and seems poised to leave behind old mates like Ali, who secures a cushy job assisting efforts to eradicate the Dutch elm disease ravaging Edinburgh’s trees. On her first day at work Ali accompanies her boss to a pub and meets his brother, who is secretly smuggling industrial grade heroin out of the local pharmaceutical plant, inadvertently unleashing another ravaging early ’80s disease, AIDS (Welsh details both in newsy “Notes on an Epidemic” chapters). Meanwhile Matty, Simon, Frank, and Danny idly wander the streets in pursuit of pints, skag, lassies, brawls, and kindness. But after Mark deceives Fiona about his own drug use, and his disabled little brother dies, he joins the downward heroin-fueled trajectory of his disaffected peers. Parental intervention, arrests, and even rehab can’t change the course of their addiction as they become increasingly cynical and uninterested in anything other than the next fix. Their combined experiences twist together the fading London punk scene, the declining power of the proletariat, hooliganism, neo-Nazism, and the AIDS epidemic that characterized Thatcherite Britain. Careening between boisterous, belligerent, hilarious, and maudlin emotional registers like a drunk at a party, this novel has a dizzy energy in spite of its aimless plot and general corpulence. As with much of Welsh’s oeuvre, it’s not for the uninitiated—the prose is dense with Edinburgh dialect, disturbing sexual encounters, explosive violence, and much sorrow. Agent: Jenny Chapman, Jonathan Cape. (Sept.)
close
Details