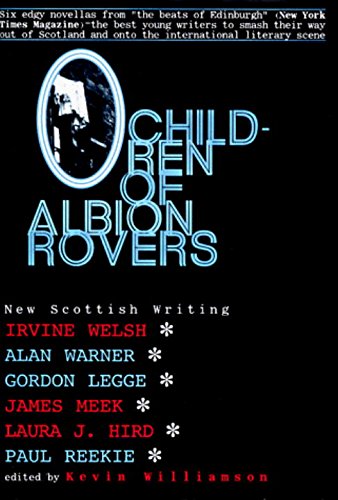 Children of Albion Rovers: An Anthology of New Scottish Writing

Six Scottish authors--Irvine Welsh, Gordon Legge, Alan Warner, James Meek, Laura J. Hird and Paul Reekie--contribute novellas to this raw-edged collection edited by fellow Scot Williamson, former publisher of Rebel, Inc. magazine. In Welsh's (Trainspotting) ""The Rosewell Incident,"" a clique of tobacco-dependent aliens decide to touch down in Rosewell, Scotland, because, as the alien leader explains, ""we ken the score. It's only Scotland. Nae cunt listens tae youse dippit fuckers."" Of the six writers in this desperately hip anthology, only Welsh tackles Scotland's political impotence head on, and the fearless antagonism, variations of voice and effortless momentum of his story distinguish it as the most ambitious and accomplished of the bunch. Even when Scots angst isn't the obvious subject of these novellas, however, it makes veiled appearances--for instance, in the self-indulgent intellectualism of Reekie's (Zap, You're Pregnant) ""Submission,"" which pokes fun at the naivete of Scottish folklore, or in Whitbread nominee Warner's (Morvern Callar) trippy novella-of-manners, ""After the Vision."" While Warner owes a clear debt to Joyce, Meek's (McFarlane Boils the Sea; Last Orders) stylized ""Brown Pint of Courage"" pays homage to that great-grandfather of Celtic modernism, Thomas Carlyle. ""Pop Life"" is Legge's (In Between Talking About the Football; The Shoe) sentimental, predictable account of a three-way friendship fostered by a shared lust for record-collecting. Hird's debut, ""The Dilating Pupil,"" meanwhile, in which a self-satisfied Edinburgh high-school teacher is seduced by his star student and falls victim to a range of cutting-edge chemical stimuli, is the most humanly compelling and vividly imagined piece in the collection. The urgent, accented voices here comprise a motley crew but one worth listening to. (June)
close
Details