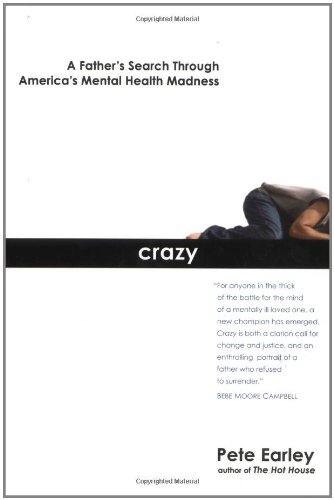 Suffering delusions from bipolar disorder, Mike Earley broke into a stranger's home to take a bubble bath and significantly damaged the premises. That Mike's act was viewed as a crime rather than a psychotic episode spurred his father, veteran journalist Pete Earley ( ), to investigate the "criminalization of the mentally ill." Earley gains access to the Miami-Dade County jail where guards admit that they routinely beat prisoners. He learns that Deidra Sanbourne, whose 1988 deinstitutionalization was a landmark civil rights case, died after being neglected in a boarding house. A public defender describes how he—not always happily—helps mentally ill clients avoid hospitalization. Throughout this grim work, Earley uneasily straddles the line between father and journalist. He compromises his objectivity when for most of his son's ordeal—Mike gets probation—he refuses to entertain the possibility that the terrified woman whose home Mike trashed also is a victim. And when, torn between opposing obligations, he decides not to reveal to a source's mother that her daughter has gone off her medications, he endangers the daughter's life and betrays her mother. Although this is mostly a sprawling retread of more significant work by psychologist Fuller Torrey and others, parents of the mentally ill should find solace and food for thought in its pages.