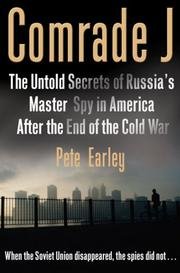 Comrade J: The Untold Story of Russia's Master Spy in America After the End of the Cold War

Former journalist and bestselling author Earley ( ) tells the story of Russian spymaster and defector Sergei Tretyakov—code-named Comrade J—in an exposé with few surprises. A career intelligence officer, Tretyakov was Russia's deputy resident in New York City from 1995 to 2000, responsible for all covert operations there. But as the political and economic situation in Russia deteriorated under presidents Boris Yeltsin and Vladimir Putin, Tretyakov began to consider defecting. Disgusted by the spy agency's shoddy standards and the “corrupt political system” in Moscow and seeking “a better future” for his teenage daughter Ksenia, Tretyakov became a double agent for the FBI before finally defecting in 2000. He claims that he is now breaking his silence because he hopes to warn America that Russia is not a friend and “is trying to destroy the U.S. even today.” Among his more controversial assertions, in 126 hours of interviews with the author, is that former deputy secretary of state Strobe Talbott was considered a “Special Unofficial Contact” by Russian intelligence—a claim that Talbott adamantly denies. While many of Tretyakov's claims are impossible to verify, Earley mounts a spirited defense of his veracity in this workmanlike account.