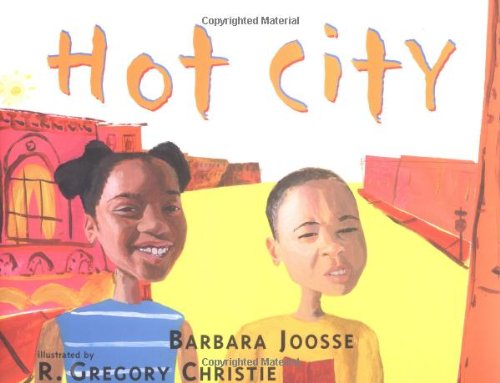 Summer heat radiates from this evocative work by the creators of . Against a cityscape backdrop of blazing pink, orange and yellow hues, the young narrator sets the scene: "Me and Joe on the front porch steps,/ cement steps, hot as a fry pan,/ sizzlin'./ And my own sweet self?/ That's what's cookin'." Mimi and her restless younger brother ("Oh, no. He's got jumps in his skin") spy on Mama and the other chatting "blah blah ladies," buy snow cones ("Princess pink for me. Dinosaur green for Joe") and walk along the steamy street ("Bricks on one side, bakin' in the sun./ Buses on the other, huffin' out hot") to the "coooool library." There Mimi heads for "the Princess shelf" while Joe "goes to Dinosaurs." As the two pore over their books, Joosse's narrative gives way to four fanciful wordless spreads in which Mimi, as a medieval princess, rides through a lush, verdant forest atop a pink unicorn while Joe hugs the neck of a dinosaur. Christie's quirky acrylic paintings take playful liberties with perspective and scale, and make effective use of unorthodox color (fuschia and lemon "brownstones," tangerine streets). Perceptive readers will pick up on a fun visual premonition: as the siblings approach the library, Mimi glances at a lost-pet-type flyer on a phone pole, picturing a unicorn. Ages 4-up.