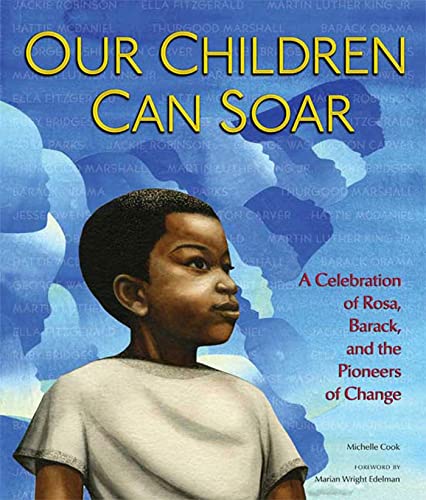 Our Children Can Soar: A Celebration of Rosa, Barack, and the Pioneers of Change

Showcasing the art of 13 artists, this resonant book was inspired by a simple yet searing phrase that celebrates the achievements of African-Americans, which was featured, in various versions, online and at rallies during the 2008 presidential campaign. Cook's adaptation pays tribute to 10 individuals, including George Washington Carver, Jesse Owens and Jackie Robinson. These figures' triumphs are shown as part of a seamless continuum: “Martin marched... so Thurgood could rule. Thurgood ruled... so Barack could run. Barack ran... so our children can soar!” The spreads understandably represent an array of artistic styles and media, yet they form a cohesive and affecting collective portrait: a musical staff swathes Pat Cummings's Ella Fitzgerald like a boa, while Shadra Strickland's Ruby Bridges is a small yet determined figure, marching up the schoolhouse steps against a backdrop of protestors. Additional images from Leo and Diane Dillon, James Ransome, E.B. Lewis, Eric Velasquez and others, corroborate Children's Defense Fund founder Marian Wright Edelman's assertion, in the book's foreword, that African-American history is “the story of hope.” Ages 4–8.