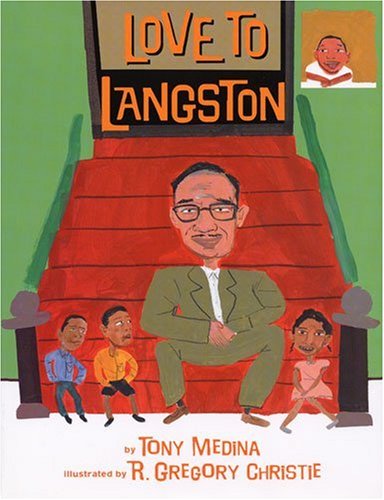 Medina's () introduction states that his book "represents one Harlem poet's homage to another," and this compilation exudes affection for the Harlem Renaissance muse. The events of Langston Hughes's life inspire 14 impressionistic, free-verse poems. Some entries might be difficult for youngsters to interpret without referring to the author's concluding notes, which succinctly explain the relevance of each poem. In "First Grade," for instance, the narrator laments that "The teacher makes me sit in the corner in the last row far away from the other kids" and "tells one kid not to eat licorice or he'll turn black like me." The notes explain that when Hughes attended first grade in Topeka, Kans., in 1907, his teacher "took out her racist attitudes on Langston." Hughes's love of books, his disdain for his father and the inspiration he gleaned from Harlem and from jazz are among the topics of subsequent poems. Though Medina incorporates some of Hughes's style (refrains such as "Libraries/ are a special place/ for me") and layout, few of the poems build to an emotional climax. The content of the poems outweighs its impact. Still, Medina's solid research and accessible presentation may well lead readers to the work of Hughes himself. Christie contributes stylized acrylics, but unlike his artwork in , the paintings here do not reflect the subject's many moods. A standout is the spread "Leaving Harlem for Africa," which shows the poet bound for unexplored shores. Ages 6-up.