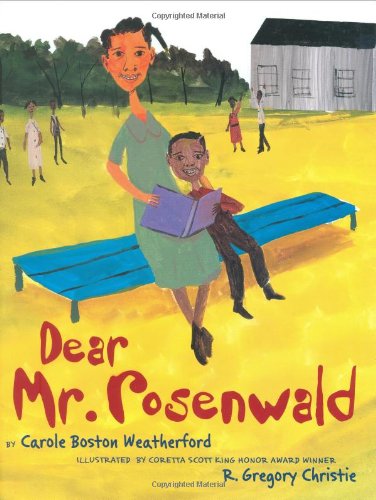 Written in verse, this moving story narrated by a 10-year-old African-American girl in 1921 in the rural South follows a community's efforts to build a desperately needed school. Weatherford ( ) takes her inspiration for this fictionalized account from the actual construction (from 1917 to 1932) of more than 5,000 such schools, with financial aid from Julius Rosenwald, president of Sears, Roebuck. As the book opens, young Ovella describes the crude building that serves as a school and the "harvest break" from lessons, during which all children must help in the fields. But hope arrives in the form of a proposal from Rosenwald. The village's preacher explains, "Before [Rosenwald's] foundation will give a cent,/ you have to raise money on your own./ White folks have to pitch in, too." Christie's ( ) stylized, boldly hued gouache and colored pencil art chronicles the community's efforts (the church donates an acre of land for the school; both black and white farmers donate lumber) as they collect money "a nickel and dime at a time." Then folks pitch in to build the school, and paint and furnish it. At the school's ceremonial opening, a new teacher tells the students they are "diamonds in the rough./ I will polish you bright as stars." Finally, Ovella pens a poignant thank you letter to Mr. Rosenwald, noting, "This school/ is the first new thing I ever had/ to call my own." A heartening sliver of American history. Ages 7-10.