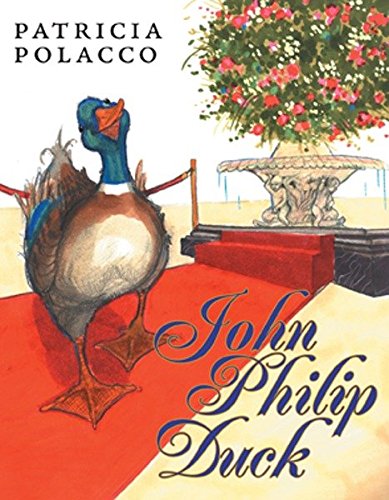 Polacco ( ) adds another feather to her picture-book cap with this fictionalized look at how a lobby fountain at the Peabody Hotel in Memphis, Tenn., famously became home to a group of performing ducks. During the Depression, young Edward finds work with his father on the Peabody staff. Though he knows it's against the rules, Edward keeps a pet duckling at the hotel, where he teaches his web-footed friend to march to John Philip Sousa music. Almost all the hotel employees collude with him, but the strict general manager, Mr. Schutt, eventually discovers the secret and ends up challenging Edward to train a whole group of ducks to be a tourist attraction. Edward, more than up to the task, soon establishes himself as the hotel's first "official Duckmaster," a position that the real-life Edward Pembroke held for more than 50 years. Polacco once again taps her talent for weaving threads of history and family stories (this time, someone else's) into an appealing and enlightening package. With its carefully chosen, subtly phrased details, the well-paced tale offers a distinct snapshot of a particular time and place. The artist's signature gouache-and-pencil compositions—a dusty, humble Tennessee farm; the neatly appointed hotel fountain and tables set for tea; proud parading ducks— encourage readers to explore an entertaining and enduring tradition. Ages 5-up.