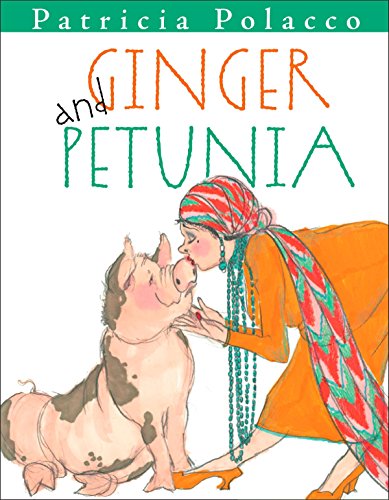 Droll text and playfully hyperbolic art serve up a piggish portion of humor in Polacco's ( ) tale starring a porcine pet with plenty of personality. Petunia's owner, a "brilliant pianist" who teaches musical prodigies, lives in a "scrumptious home" and wears delightfully flamboyant outfits. Elegant Ginger showers oodles of affection on Petunia, for whom she has installed a mud hole in the backyard, topped by a gazebo to make it "look like a spa." When Ginger is invited to be a guest soloist in London, the sitter she hires to tend to her pampered pet is a no-show, but Petunia takes care of herself—and then some. Disguised in Ginger's eccentric ensembles (which would turn Miss Piggy green with envy), Petunia presides over the prodigies' piano lessons. An inspired spread depicts the porcine impersonator striking the very poses Ginger assumed in an early group of vignettes. Though she wreaks comic havoc as a socialite, Petunia can do no wrong. She knocks over and shatters a statue in an art museum, and reveals it to be a forgery made of plaster rather than marble. At a dinner the mayor then throws in her honor, she ignores her silverware, slurps soup from a bowl and burps loudly, inspiring her admiring fellow diners do the same. In her pièce de resistance, Petunia, esteemed guest at the governor's ball, dances her host right into a huge vat of chocolate mousse ("It looked just like mud!") and everyone "that was anyone" follows suit. Polacco's porcine protagonist will also endear herself to readers, who will happily wallow in this lighthearted caper. Ages 4-up.