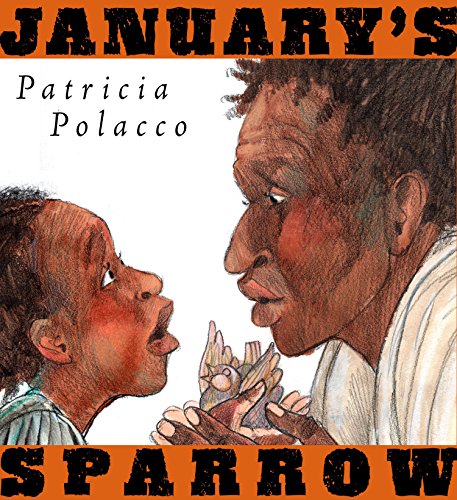 Based on actual events, Polacco’s ( ) story is at once horrifying and heartening. It centers on the Crosswhite family, slaves who flee their Kentucky plantation after witnessing the merciless whipping of January, a slave caught while attempting escape. Led to believe that January died from his wounds, Sadie Crosswhite is heartbroken when she inadvertently leaves behind the wooden sparrow he carved for her. Writing in credible dialect, Polacco conveys the family’s fear and fortitude as they follow the North Star, “trackin’ through cornfields, climbin’ up bluffs, rollin’ through muck and mud.” They take refuge in Marshall, Mich., a sanctuary on the Underground Railroad, where they remain until slave chasers track them down. After a confrontation in which the town rallies behind them, the Crosswhites steal away for Canada, accompanied by January, who has shown up unexpectedly. Like Polacco’s prose, her dynamic and sometimes brutal pictures, rendered in pencils and markers, hold nothing back—be it the Crosswhites’ anguish and terror while under pursuit or their affection for each other and those who harbor them. An illuminating and trenchant account. Ages 8–up.