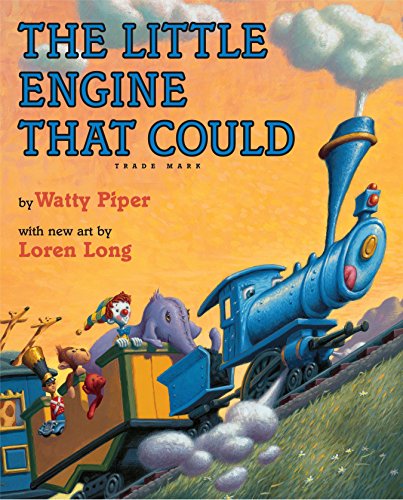 The Little Engine That Could

Long ( ) pays respectful homage to George and Doris Hauman's compositions in his visual interpretation of the classic tale of determination and perseverance, first published in 1930. Yet the artist adds a lushness to the spreads and injects even more personality into the characters; he uses the larger format to play up the vistas of mountain and valley that pose such a challenge to the engines on this route, and gives "the funniest little toy clown you ever saw" a starring role. A cheerful purple elephant whose eyes droop as one engine after another declines to pull their load, a pair of pull-toys containing curious giraffes (their necks bow in disappointment) and a cuddly, expressive stuffed monkey are among the supporting cast. The spacious spreads also allow for a more dramatic flow of the text (the original often broke a paragraph in the middle of a climactic moment). Long adorns the different engines with wry human characteristics. The cowcatcher of the haughty Shiny New Engine resembles teeth exposed by a snarl, while the Rusty Old Engine (who says, "I can not. I can not") sports a smokestack in the shape of a dilapidated top hat, a mop of gray hair and a monocle. The pièce de résistance is the brave Little Blue Engine that could, with bright blue eyes in place of windows, a wide smile and—while chugging up that daunting mountain—a pink tongue protruding from her mouth. Both faithful fans and newcomers will enjoy this triumphant ride and eagerly climb aboard for repeat excursions. Ages 3-up.