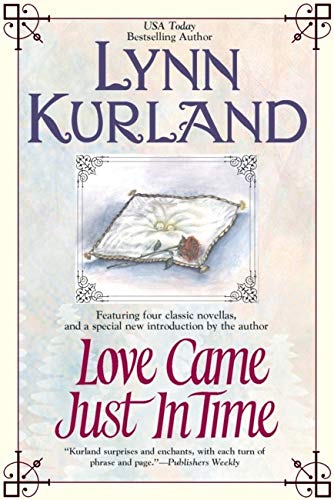 All the trappings of conventional romance novels are on display in this collection of four previously published novellas: wealthy, masculine heroes and proud, virtuous heroines; lots of feisty banter during courtship; "exotic" locales and time periods. The more fantastical touches demand a willing suspension of disbelief in readers and help separate Kurland from the pack. "The Gift of Christmas Past" opens with Sir Sweetums, a cat in his ninth life, acting as matchmaker for his despairing mistress, Abigail Garrett. He sees to it that she falls into a pond in Michigan and shortly thereafter crawls out of a sewage-filled moat around a castle in 13th-century England, where she's greeted by a knight called Miles of Artane. "The Three Wise Ghosts" are 16th-century Scottish clansmen determined to unite an unlikely pair of 20th-century descendants in marriage: Megan, an American free spirit employed in a California theme park, and Gideon, the workaholic CEO of a London conglomerate. "And The Groom Wore Tulle" opens in Scotland in 1313, when Ian Macleod goes to sleep in his enemy's rat-infested dungeon and wakes up in 1999 in the workroom of a Manhattan bridal salon. Jane, the heroine, is a Cinderella character, a talented dress designer exploited by her imperious lady boss. "The Icing on the Cake" is a contemporary story set in Alaska where a misunderstanding about gender allows a male writer and chef to rent a room from an atypical female wilderness guide who scorns city-bred males and housekeeping. A light touch and a sense of playfulness make these stories more fun to read than the standard fare.