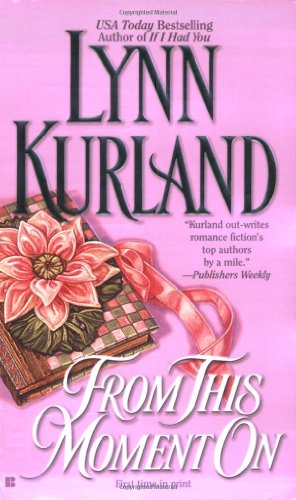 FROM THIS MOMENT ON

With its gruff, burly hero and warrior-like heroine, Kurland's winsome medieval-era romance fearlessly flies in the face of convention. Colin of Berkhamshire, also known as the Butcher, is so fearsome that all of his prospective brides have created excuses to avoid marrying him—all except one. Aliénore of Sologne simply vanished and, disguised as a knight, secured a position attending Lady Sybil of Maignelay. Posing as Sir Henri, Aliénore accompanies Sybil to meet the man to whom she has been secretly betrothed. Too late, Henri realizes that the bridegroom is the infamous Butcher. Her horror intensifies when Colin, who prides himself on his fighting skills, makes it his mission to teach "Henri" sword skills and manliness of speech and mannerisms. Aliénore's wild imagination and Colin's resemblance to a large mastiff hound (with a tough exterior and soft interior) keep the narrative bursting with fun. The plot takes an even more delightful turn after Colin realizes Henri is his runaway Aliénore and he sets about "wooing" her with suave lines like "You look, um, quite a bit like a girl." A disarming blend of romance, suspense and heartwarming humor, this book is romantic comedy at its best.