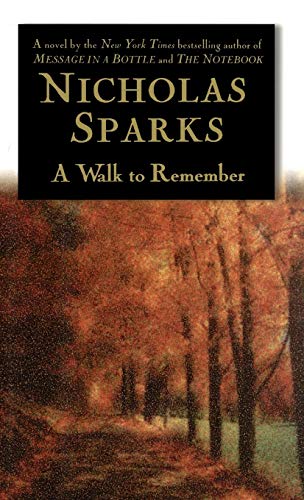 A Walk to Remember

Sure to wring yet more tears from willing readers' eyes, the latest novel by the bestselling Sparks is a forced coming-of-age story concerning a pair of unlikely young lovers. In a corny flashback device that mimics The Notebook, 57-year-old Landon Carter spirits himself back to his fateful senior year in high school in Beaufort, N.C., when he was an archetypal troublemaking teenager of the 1950s, changed forever by an unexpected first love. Jamie Sullivan, the Bible-toting minister's daughter, with her drab brown sweaters, spinster hairstyle and sincere, beatific advice, is the obvious target of high school ridicule. Despite conspiring in Jamie's derision, class president Landon, desperate for a date for the homecoming dance, finds himself asking Jamie. Afterwards, Jamie asks him to participate with her in the metaphor-laden school Christmas play (Jamie plays the angel). Landon endures the taunting of his friends and forms an uneasy friendship with Jamie, which is carefully supervised by her father. The teens visit needy orphans, give Oscar-worthy performances in the school play and share dreams watching the sunset. Landon realizes he's in love with Jamie, but, of course, she is hiding a devastating secret that could wring her from Landon's arms forever. Now tortured by his knowledge of what will be her terrible fate, he must make the ultimate decision that catapults him into adulthood. Readers may be frustrated with the invariable formula that Sparks seems to regurgitate with regularity. Although the narrator declares, ""My story can't be summed up in two or three sentences; it can't be packaged into something neat and simple that people would immediately understand,"" this is the author's most simple, formulaic, and blatantly melodramatic package to date. Agent, Theresa Park, Sanford Greenburger Associates. Doubleday Book Club and Literary Guild main selections; 20-city author tour; movie rights optioned by Denise DiNovi at Warner Bros.. (Oct.)
close
Details