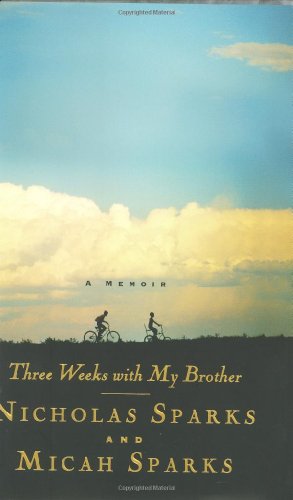 THREE WEEKS WITH MY BROTHER

When bestselling author Sparks ( ; ; etc.) receives a brochure offering a three-week trip around the world, it's not hard for him to persuade Micah, his older brother, to join him in touring Guatemala's Mayan ruins, Peru's Incan temples, Easter Island, the killing fields in Cambodia, the Taj Mahal and Ethiopian rock cathedrals. His account of the trip is refreshingly honest and perceptive. At each stop, the brothers, both deeply committed to their families, cover the crucial moments in a life full of familial love and tragedy: Nick's role as the middle child always feeling left out; his marriage in 1989; the loss of Nick and Micah's mother two months later after a horseback riding accident; the death of Nick's first baby and the physical problems of his second son; the death of their father in a car accident; and the passing of their younger sister from a brain tumor. As the brothers travel together through these mythical sites and share candid thoughts, they find themselves stunned by fate's turns, realizing that a peaceful moment may be shattered at any time. Weaving in vignettes of tenderness and loss with travelogue-like observations, Sparks's account shows how he and his brother both evolved on this voyage. "Somehow there was a chance we could help each other, and in that way, I began to think of the trip less as a journey around the world than a journey to rediscover who I was and how I'd developed the way I did."