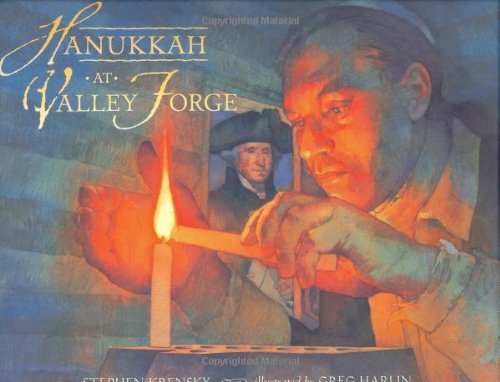 The young Jewish soldier at the center of this story doesn't seem to have much to celebrate. Nonetheless, he dons a yarmulke and lights candles for the first night of Hanukkah—drawing none other than General Washington to his door. As the menorah casts a glow on the general's face, the soldier recounts the story of the Maccabees, and Washington finds solace in the parallels between that ancient struggle and his own ("We too have a cruel enemy who leaves us only with the choice of brave resistance or abject submission"). Basing their story on a true incident (explained in an endnote), the team behind creates a thoughtful and touching book. The volume moves fluidly between the two time periods, infusing the scenes with urgency and intensity, and the portrait of Washington here is not only heroic, but human. An excellent reminder of the relevancy and importance of the holiday's message through the ages. Ages 5-up.