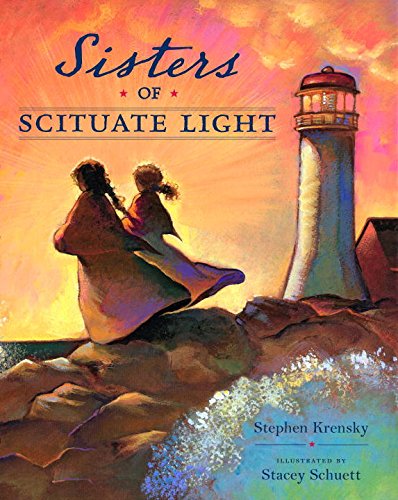 Krensky ( ) takes an episode from the War of 1812—two sisters outwit the mariners of a British warship by pretending that their fife and drum rendition of “Yankee Doodle” heralds an entire regiment—but his mannered retelling masks much of its drama. Conveying the background information (the purpose of lighthouses, the duties of lighthouse keepers, the story of the first raid on Scituate, etc.), the narration moves slowly, and then includes unnecessarily theatrical language (“Confound these Americans!”). Dialogue is taken from interviews the heroines gave, doing little to ease the stilted tone. Schuett's ( ) glowing illustrations use light convincingly throughout, and she wisely shifts the girls from their real ages of 17 and 21 to the ages of the target audience. However, her portrayal of the mariners amplifies their villainy to almost ludicrous proportions. “The British mariners smiled grimly,” says the text, but the three sailors approaching the shore look like caricatures of Snidely Whiplash. Ages 6–up.