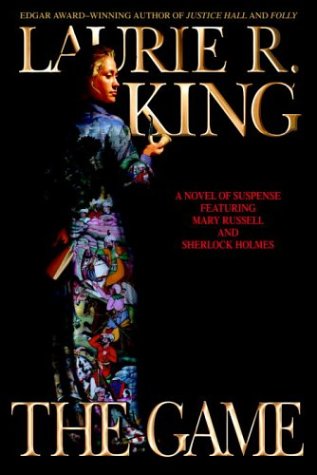 The seventh Mary Russell adventure (after 2002's ) may well be the best King has yet devised for her strong-willed heroine. It's 1924, and Kimball O'Hara, the "Kim" of the famous Rudyard Kipling novel, has disappeared. Fearing some kind of geopolitical crisis in the making, Mycroft Holmes sends his brother and Mary to India to uncover what happened. En route, they encounter the insufferable Tom Goodheart—a wealthy young American who has embraced Communism—traveling with his mother and sister to visit his maharaja friend, Jumalpandra ("Jimmy"), an impossibly rich and charming ruler of the (fictional) Indian state of Khanpur. With some local intelligence supplied by Geoffrey Nesbit, an Englishman of the old school, and accompanied by Bindra, a resourceful orphan, the couple travel incognito as native magicians (Mary, it goes without saying, learns Hindi on the voyage out). Ultimately, their journey intersects with the paths of the Goodhearts and the mysterious Jimmy. At times, travelogue and cultural history trump plot, but the sights, smells and ideas of India make interesting, evocative reading (Mary's foray into the dangerous sport of pig-sticking is particularly fascinating). If for some Mary Russell is too perfect a character to be as enduringly compelling as Holmes, all readers will appreciate the grace and intelligence of King's writing in this exotic of a book.