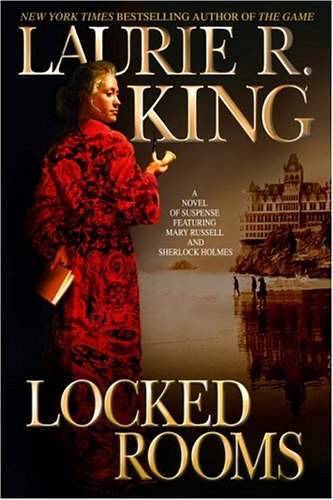 In her last outing, (2004), Mary Russell and her husband, Sherlock Holmes, traveled to India on a case of geopolitical significance, but in the richly imagined eighth novel in this acclaimed series, set in San Francisco in 1922, Russell undertakes a far more personal investigation. Since she began her journey back to her hometown—ostensibly to deal with her father's estate—Russell has been tormented by strange dreams, one of which involves the "locked rooms" of the title, and the sight of her San Francisco childhood home opens a flood of memories and emotions, most of which she's loathe to allow into her über-rational mind. When someone takes a shot at her, Holmes enlists the help of Pinkerton agent Dashiell Hammett and Russell tries to unlock her past, in particular the "accident" that killed her family and left her an orphan in 1914. King's re-creation of San Francisco, especially the backstory during the devastating 1906 earthquake, is superb, and it's a pleasure to see the unusually competent Russell struggling with her own psyche. The plot may be a bit thin, but the narrative has real momentum, the characters are engaging and the prose, as always, is intelligent, evocative and graceful.