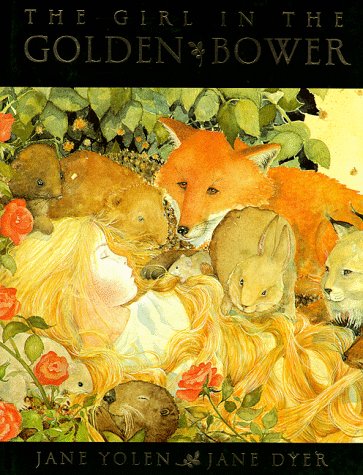 The Girl in the Golden Bower

This elegant book may well leave a lasting impression on readers of all ages. With vivid imagery, Yolen's (Grandad Bill's Song) flowing narrative easily establishes the dreamy mood of an old-fashioned fairy tale. She introduces a bereaved king and his neglected castle before telling of a woodsman who discovers a frail young woman wandering in the forest (``There was something permanently lost about her, as if everything she had in the world was gone, even her name''). He takes her in, the two fall in love, marry and have a daughter, Aurea. Yolen weaves into her plot a magic comb passed from the mother to Aurea, an untimely death and the woodsman's remarriage to an evil sorceress who torments Aurea. As the comb's powers help Aurea save herself, the author gracefully brings her tale full circle, revealing the surprise identity of Aurea's mother and, refreshingly, rewarding her heroine with something other than a Prince Charming. As beguiling as the text, Dyer's (Talking Like the Rain) precisely detailed, lustrous watercolor paintings are reproduced on gold-colored, simulated-parchment pages. Unfortunately, Dyer does not convey all the magical effects emphasized in the story (for example, although the fur of some woodland creatures is said to be ``fantastically twined and braided with gold,'' Dyer's animals look quite ordinary), but this is a minor quibble in an altogether memorable book. Ages 4-8. (Sept.)
close
Details