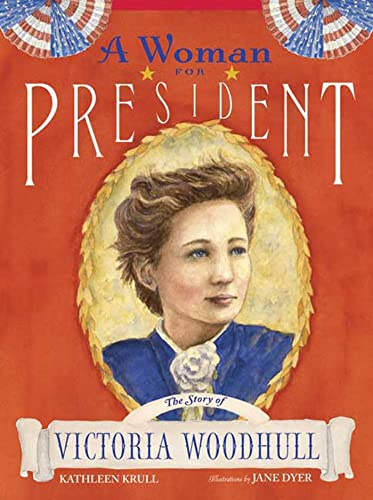 A WOMAN FOR PRESIDENT: The Story of Victoria Woodhull

Krull ( ) presents a passionate biography of an oft-overlooked figure in the history of women's rights and presidential politics ("It is time—when the odds against a woman for president are still so high that few have tried—to bring her story to young readers," says the author's note). The introduction paints a bleak portrait of women's status in mid-19th century America. The author then chronicles the major events in the life of Victoria Woodhull (1838–1927), born into a poor Ohio family with an abusive father. Woodhull raised money as a child preacher and conductor of séances, and later became wealthy as a spiritual and financial adviser to Cornelius Vanderbilt in New York City—which gave her the means to pursue her dream of aiding women. With her sister, she founded the first female-owned American company to buy and sell stocks. In 1870, when women could not legally vote, Woodhull announced her candidacy for president (" the wildest, most outrageous act she could dream up to prove women's equality"). Realizing her campaign's success rested on the ability of women to vote, she became the first woman ever to address Congress, quoting statements in the Constitution that "she argued already women the right to vote." Engaging anecdotes and quotes keep this intriguing life story moving at a sprightly pace. Featuring golden tones, Dyer's ( ) softly focused watercolors ably capture period particulars as well as Woodhull's determination and grace. Ages 7-12.