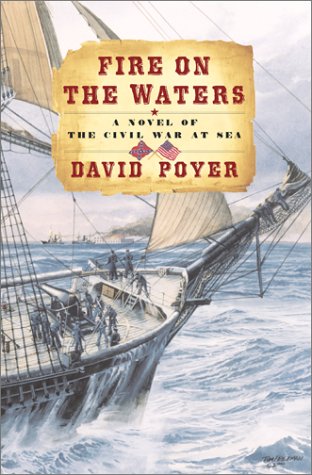 FIRE ON THE WATERS

The naval beginnings of the Civil War receive lengthy treatment in veteran author Poyer's latest seagoing adventure-cum-romance, the first of a projected series involving the internecine conflict. Here, the focus is on the efforts of the U.S.S. to provide support and relief as the union crumbles. Poyer's ensemble includes several crew members from the ill-fated ship, the most prominent being Eli Eaker, the Harvard-dropout son of a wealthy Maryland merchant, Micah Eaker, who joins the navy to prove his independence from his tyrannical father. In his adventures, Eaker turns his back on an arranged marriage with his cousin Araminta Van Velsor, who discovers the loss of the family fortune when she, too, attempts to escape her uncle's iron hand by gaining access to her inheritance. Eli and Araminta's romance plays out against the background of shifting wartime alliances, as Fort Sumter falls and the penetrates Chesapeake Bay on a clandestine mission. Poyer does a nice job of integrating the various characters and plot lines, including a narrative about a black seaman who tries to find his family through the Underground Railroad, and the story of an engine-room worker who finds himself involved in the building and then the scuttling of the . But despite his impeccable naval and historical research, and his seeding of the narrative with authentic details of food, clothing and era-appropriate dialogue, Poyer never brings the combination of the fall of Fort Sumter and the burning of the Portsmouth shipyard together into an integrated story. The fragmented book that results has plenty of meat on the bones for Civil War and naval buffs, but may struggle to find a broader audience beyond Poyer's legion of loyal fans.