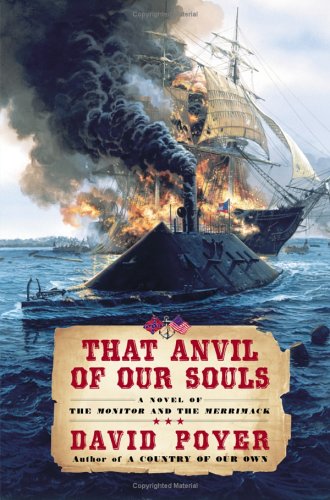 That Anvil of Our Souls: A Novel of the Monitor and the Merrimack

The veteran of 25 sea novels, Poyer ( ) extends his Civil War at Sea saga with this third installment, which begins with Catherine Claiborne burying her infant daughter, while learning that her husband, Kyd Claiborne, faces hanging as a pirate. Enter Union naval engineer Theodorus Hubbard to work on the and fire-eater Lomax Minter to search for spies working on the rival , with the climactic March 1862 battle of the two ironclads (off Hampton Roads, Va.) looming. Poyer mixes fictional characters with the likes of builder John Ericson and Commodore Franklin Buchanan (whose wounding in the first day's battle is described in grisly detail) to nice effect. Escaped slave Calpurnius Hanks sticks to his guns, literally, in spite of a shorthanded U.S. Navy that can't shake off racism and his ship, the , sinking under him. A larger cast than Poyer's naval Dan Lenson novels makes for occasional choppiness, but otherwise this book is every bit as good; Poyer makes readers see and feel the blockade and the men who tried to maintain it.