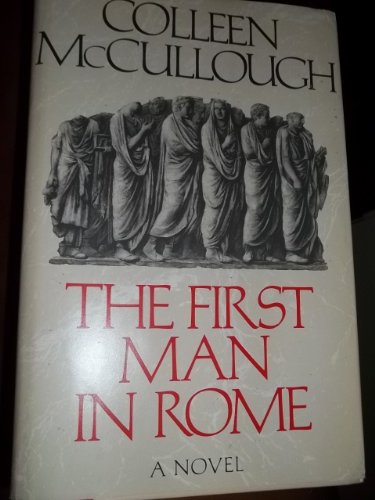 The First Man in Rome

If nothing else, this hefty tome, the first of a projected series, proves that McCullough ( The Thornbirds ) can write a serious historical novel that edifies while it entertains. Evoking with impeccably researched, meticulous detail the political and social fabric of Rome in the last days of the Republic, McCullough demonstrates a thoroughgoing understanding of an age in which birth and blood lines determine one's fate, and the auctoritas and dignitas of the Roman family mean more than any personal relationship. When the narrative opens in 110 B.C., this rigidly stratified social order has begun to erode. The protagonist, Gaius Marius, is the symbol of that gradual change. He is the embodiment of the novel's title, a genuine New Man who transcends his Italian origins and earns the ultimate political accolade--the consulship--for an unprecedented six terms. A brilliant military leader, Marius defeats the invading barbarian German tribes. Wily, shrewd and pragmatic, Marius is not above using bribery and chicanery to achieve political ends. Nor, indeed, are his fellow officials, whose sophisticated machinations are in odd juxtaposition with their penchant for jeering at one another, which leads to fisticuffs, brawls and even assassinations. As usual, McCullough tells a good story, describing political intrigue, social infighting and bloody battles with authoritative skill, interpolating domestic drama and even a soupcon of romance. The glossary alone makes fascinating reading; in it, for example, McCullough reasons that Roman men did not wear ``under-drawers.'' The narrative's measured pace, however, is further slowed by the characters' cumbersome names, which require concentrated attention. Those willing to hunker down for a stretch of close reading will be rewarded with a memorable picture of an age with many aspects that share characteristics ontemporaneous with our own. Maps and illustrations by the author. 300,000 first printing; BOMC main selection; author tour. (Oct.).
close
Details