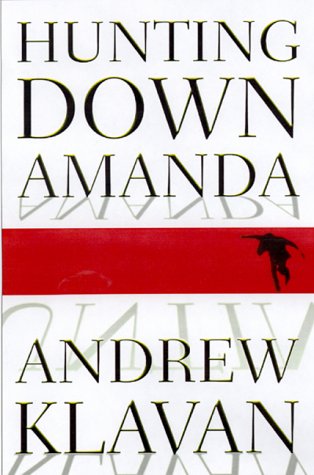 1999 may be Klavan's breakout year: the film version of his novel True Crime, starring Clint Eastwood, was a hit, and Morrow is backing his immensely exciting new novel with a major promo campaign. Any breakout will be past due. Admirers of Klavan thrillers acknowledged (Don't Say a Word, etc.) and pseudonymous (as Keith Peterson, The Scarred Man, etc.) know that this author at his best bows to no one for whiplash plotting and page-whirling suspense. He's at his best here. The novel opens full-tilt, with a rain of flesh and ""liquid fire"" on a small town in Massachusetts. Into the ground-level conflagration caused by the plane explosion walks a little girl. Her mother, Carol Dodson, chases after her and finds her in the arms of a man staggering through the fire, who hands the girl to Carol. ""Oh God,"" Carol says in a moment of clarity whose significance is revealed only later, ""now they'll come after her."" And a team of villains does, with shocking fierceness, alerted to Amanda's location by the incident and headed by one Edmund Winter, a killer as stone-cold as his name and dispatched by a multinational corporation with a lethal--if a bit too incredible--interest in both little Amanda and the man at the crash site. Fighting to save the girl are several equally desperate characters, including her mother, now on the run, willing to do anything, including selling her body, for her daughter; Lonnie Blake, a soul-blasted jazz musician looking for a reason to live; and an embittered lit professor stricken with cancer. Related in trim, athletic prose, the novel unfolds around New England and New York City as an extended, twisty chase, breathtaking but seriously deepened by its fallible heroes' varied struggles for redemption. The ending is a kick in the solar plexus but feels just right: this is a thriller with smarts equal to its ultra-slick style. $300,000 ad/promo; author tour; rights sold in the U.K., France, Italy, Germany, Holland and Japan. (July)
close
Details