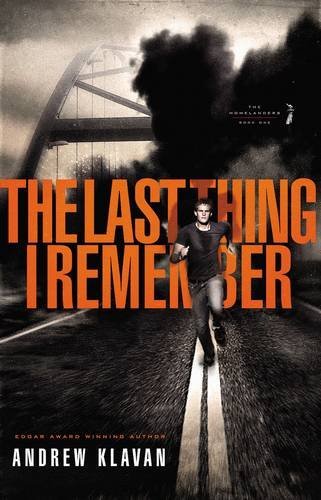 The Last Thing I Remember

The first young adult novel from Edgar-winner Klavan, which kicks off the Homelanders series, offers fast-paced action sequences, but disappoints with a weak plot. Charlie West is a good student, a black belt at karate and has finally asked out his dream girl. One night, he goes to sleep and wakes up to find himself one year in the future at a secret compound, with no memory of what's happened to him. He manages to escape, and as he evades his former captors. he discovers that he's also a fugitive from the law and has somehow been drawn into an Islamist terrorist conspiracy. Details of the last day Charlie remembers are slowly filled in over the course of his escape, but the most intriguing parts of the novel are the present-day action sequences; although Charlie often gets lucky, he's also very capable of recognizing that luck and taking advantage of opportunities when they arise. Unfortunately, he's never really given any room to grow in his personal beliefs or character, with his certainty that he's always correct consistently getting reinforced throughout. Ages 14–up.