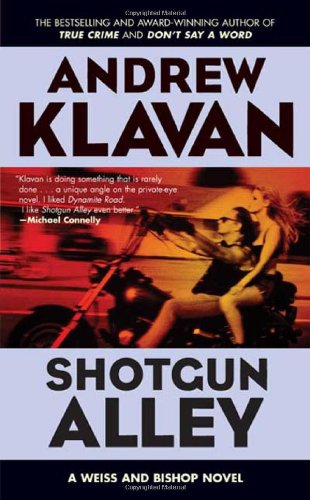 Scott Weiss is a middle-aged PI based in San Francisco, an ex-cop with a basset hound's face, a romantic's soul and an empath's ability to read others. Jim Bishop is a young, handsome live wire with a taste for violence, drugs and loose women. Bishop works for Weiss, and the interplay between them is only one reason of many to read this memorable thriller from Klavan ( , etc.). Last (and first) seen in last year's , Weiss and Bishop here tackle separate cases, with Bishop taking the foreground as he is hired by a millionaire with political ambitions to retrieve the man's teenage daughter, Holly. She has shucked daddy for Cobra, head of a homicidal outlaw biker gang—and the only way to retrieve her is to seduce her. Meanwhile, Weiss takes on the case of an arch-feminist professor at Berkeley who hires him to track down the anonymous man who, she says, has been harassing her with erotic e-mails. Both cases hold major surprises that spin the narrative around. That narrative itself is a surprise, because although most of it is in the third person, Klavan breaks into it from time to time in his own first person, claiming in a foreword that the story is true and based on his early years working for a PI firm. In any case, the story is emotionally true: Klavan's understanding of the human heart and how it can be torn or salved by eros is uncanny. There's sharp action throughout and the interplay between Bishop's wildness and Weiss's moral gravity is a wonder. The book's only flaws are the jarring first-person intrusions, but they're bumps in a joy ride that's as exciting and real as any this year in thrillerdom.