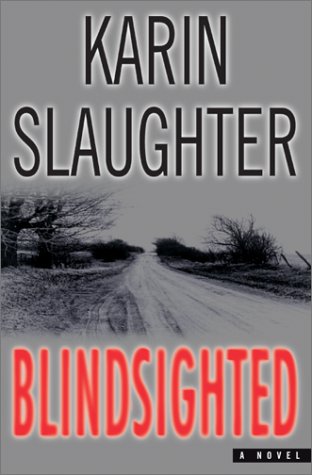 Billed as "Thomas Harris Meets Patricia Cornwell" and heralded by much advance hoopla in industry magazines, this long-anticipated launching of a scheduled three-book series featuring an attractive Georgia university town pediatrician-coroner marks the debut of a promising young author, but ultimately disappoints, partly due to overly-exorbitant pre-publishing claims. As Dr. Sara Linton leaves her pediatric clinic to meet her 33-year-old younger sister for lunch at a campus eatery, she receives a postcard picturing Atlanta's Emory University, where she interned. The enigmatic biblical message reads, "Why hast thou forsaken me?" At the diner, she goes to the restroom and discovers a young blind university professor who has been raped and brutally slashed with a knife. Too late to save her, Sara calls her ex-husband police chief, who, coincidentally, employs the victim's twin sister, Lena, as a detective. The trail quickly leads to a missing co-ed, and suspicion falls upon her druggie boyfriend. The co-ed is found raped, heavily drugged with belladonna and stretched out nude as if crucified on the hood of Sara's car in the hospital parking lot. Soon after, Lena is abducted by the killer. Fighting her attraction to her ex, Sara begins to suspect the rape-murders are tied to her own rape in the Emory parking lot 12 years ago. At the end, little suspense remains. Sara Linton is no Kay Scarpetta and her villain is a mere shadow of the complex, chilling Hannibal Lecter, but—forgiving inept, trivia-cluttered dialogue and manifest lack of firsthand fluency in the medical arena—the offbeat characters and setting are engaging enough to leave readers awaiting a sequel.