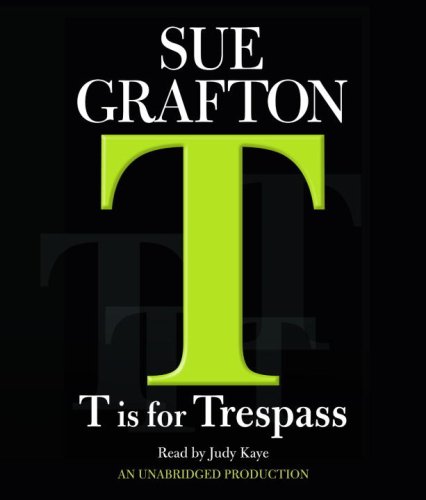 T Is for Trespass

Tony award–winner Judy Kaye has been the voice of private eye Kinsey Millhone since the beginning, and 19 titles later, she's still an inspired choice, capturing the character's unique combination of femininity and ruggedness, intelligence, street savvy and self-confidence with just a hint of uncertainty. is possibly a series best. Both reader and sleuth are working at full tilt as Kinsey interacts with a large cast. Her foremost opponent is the devious and homicidal black widow who has spun a web around the detective's aged and infirmed next door neighbor. Grafton deviates from Kinsey's narration to delve into the killer's history and mind-set, underlining the seriousness of her threat. Kaye offers a crisp, chillingly cold aural portrait of a sociopath capable of anything. Kaye's spot-on interpretation of the two very different leading characters would be praiseworthy enough, but she's just as effective in capturing the elderly men and women, the screechy landladies, the drawling rednecks, the velvet-tongued smooth operators, the fast talking lawyers and all the inhabitants of Kinsey's world.