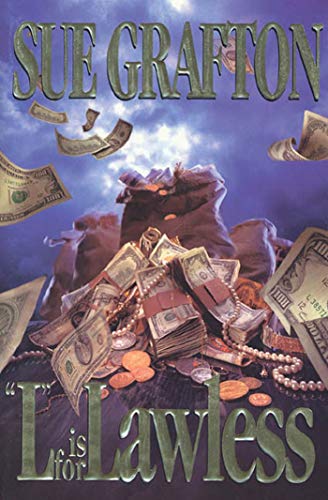 L Is for Lawless

Bemused, beleaguered and begrimed, Southern California's premier PI, Kinsey Millhone leaves her hometown of Santa Teresa in an adventure (her 12th in the alphabet series) that begins straightforwardly enough but quickly twists into a knotted string of untruths. While getting ready for the Thanksgiving Day wedding between a local tavern keeper and the elder brother of her landlord, Kinsey agrees to help the family of recently deceased neighborhood WWII vet, Johnnie Lee, find out why the military has no record of his service. Soon after Kinsey has finished looking (fruitlessly) through his papers, Lee's rooms are burgled, and Ray Rawson, who claims he is an old friend recently arrived in Santa Teresa unaware of Lee's death, is beaten up. Kinsey soon finds herself on a plane bound for Florida, in possession of only the clothes she's wearing and her purse( with an extra toothbrush), trailing a young pregnant woman in possession of a duffel bag spirited from Lee's home. On a stopover in Dallas/Fort Worth, Kinsey sleuths disguised as a hotel maid dusting baseboards (``tough to picture the boy detectives doing this,'' she reflects), meets the increasingly unreliable Rawson again and encounters yet another figure from Lee's past, a violent, vengeful psychopath. While gradually sorting out the connections among this cast, Kinsey travels to Louisville, where Rawson's 80-something mother proves her mettle and Kinsey, determining that lawless, in this case, is neither adjective nor collective noun, unravels a decades-old mystery. 750,000 first printing; Literary Guild, Mystery Guild and Doubleday Book Club selections; author tour. (Sept.)
close
Details