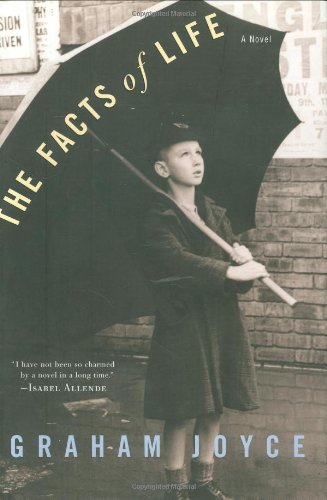 THE FACTS OF LIFE

Warm with nostalgia and flecked with the subtle fantasy that seasons nearly all his fiction, Joyce's latest novel (after ) is an uneven mix of the charming and the self-consciously peculiar. The setting is Coventry, England, in the years after WWII, where the surviving Vine family—mother Martha, her seven grown daughters and their various offspring—are all trying to build lives out of the ruins left by Nazi bombs. The bittersweet events center on young Frank, the illegitimate son of psychologically unstable youngest daughter Cassie, who like his mum has inherited a fey streak that makes him receptive to precognition and restless spirits. As Frank and Cassie bounce from household to household, cared for by different family members, their peregrinations evoke in miniature the British postwar experience, mirrored in the lives of Cassie's siblings: one is married to a man who relives the war through his affair with a dead soldier's wife; another is a politically liberal participant in a comically self-destructing socialist commune. Virtually plotless, the book unfolds as a series of vignettes, interrelated loosely through shared, affectionately realized characters and seriocomic treatments of death and (especially) sexuality. Frank's supernatural experiences, which include frequent sessions with a mysterious figure he refers to cryptically as "The-Man-Behind-The-Glass," are hints that he shares hi relatives' powers. Indeed, the subtlety with which Joyce presents clairvoyant episodes makes them entirely credible in a novel that celebrates the strong bond of family and the deep well of sensitivity on which they all draw. In the end, this is a haunting story about flawed but good-hearted people who bear the hallmarks of eccentricity but also the beneficent aura of human connectedness.