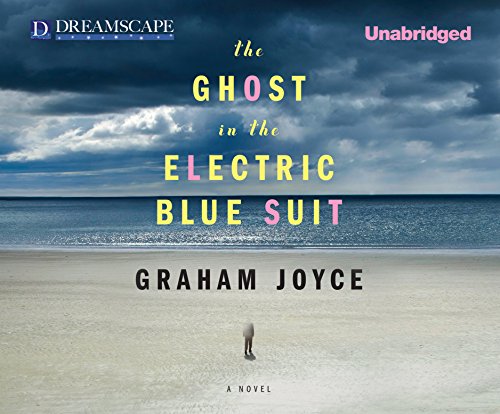 The Ghost in the Electric Blue Suit

In Joyce’s poignant, haunting, and humorous coming-of-age novel, British college student David Barwise recalls a very hot, dry summer of 1976, when, at age 19, he spent the months before his sophomore college year working at a fading holiday resort in Skegness, an English town on the North Sea. Employed as a combination social director and general factotum, David makes friends with some of his colorful “odd fish” coworkers, antagonizes others, falls in love with two women, and is disturbed by glimpses of a couple of ghost figures. His paramours are a lovely, whip-smart young dancer named Nikki and a dour but sexy cleaning lady named Terri. Terri’s married to a jealous brute named Colin, who inexplicably takes David under his muscled wing, introducing him to members of the white-supremacist U.K. Front Party, some of whom work at the resort. The ghosts—the bespoke title character and a young boy—have arrived for a reason that takes David awhile to discover. With the eccentrics, love interests, racists, and resort guests, reader Jackson is given the opportunity to display an assortment of vivid accents, among them Colin’s gruff Cockney, the fluty faux Etonian of the resort’s showtime announcer, the tenor singer’s tongue-rippling Italian, the motor-mouthed Mancunian of David’s roommate, and the demanding squawks of the guests’ children. Topping them all is the proper English of David, both as the deep-voiced, mature narrator and the higher-pitched, less-confident “new boy” at the resort. A Doubleday hardcover. (Sept.)
close
Details