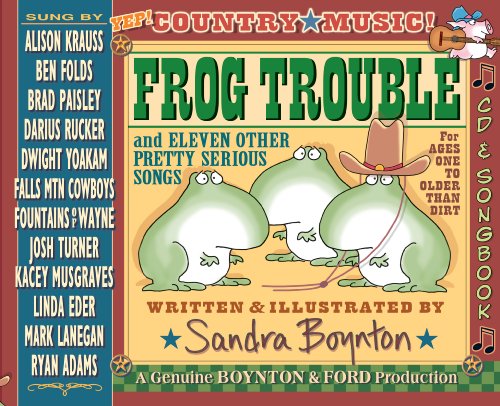 Boynton (Philadelphia Chickens) returns with a fifth vibrant CD-and-illustrated-songbook collaboration. This time, she embraces country music, inspired (as a note explains) by the soundtrack of her childhood, growing up in the 1950s, singing folk songs at school and watching westerns on TV at home. With longtime songwriting and producing partner Mike Ford and top-notch musicians, including Alison Krauss, Ryan Adams, Dwight Yoakam, and Fountains of Wayne, Boynton presents 12 tunes with some familiar country themes (trucks, dogs, heartache) as seen through a child’s or parent’s eyes. In the book’s “Look While You Listen” section, select lyrics appear with Boynton’s signature animal characters. Spot illustrations dot the “Sing and Play Along” pages, which include full lyrics and musical notation. The eponymous “Frog Trouble” is a simultaneously ominous and hilarious send-up of spaghetti western soundtracks, while Brad Paisley’s band mimics his lyrics in “Copycat,” resulting in some funny musical moments: “Stop it. (Stop it!) No, seriously. (No, seriously).” In the humorously mournful “Heartache Song,” Kacey Musgraves channels Patsy Cline as she croons, “Don’t they remember—/ all the heartache so deep/ when somebody tells you/ it’s time now for sleep.” And Ben Folds is pure honky-tonk as he insists, “Some might say the piano is broken,/ but it seems to play for me.” Boynton’s spot-on humor and the performers’ talents ensure an entertaining family outing, while demonstrating just how diverse country can be. Brief profiles of the performers, humorous interstitials about good pet names and how to talk like a cowboy, and a frog-puppet craft round out the fun. Ages 2–up. (Sept.)
close
Details