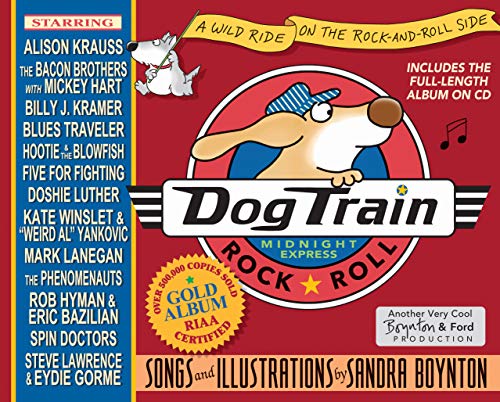 The creative team that so cleverly presented musical theater for kids with the star-studded recording is back—this time with a mostly rock-and-roll romp, and another stellar cast of musical talent. Blues Traveler, replete with John Popper wailing on his harmonica, rides the rails for the driving title track about, yes, dogs on board a midnight train where "Kittycats are not allowed/ .../ their ears in the breeze/ .../ Their cold, wet, happy,/ quiv'ring noises outside." Mark Lanegan takes the octave down a few notches with his deep and bluesy rendition of "Sneakers" about the favorite footwear that's both comfy and quiet. The 1960s British invasion star Billy J. Kramer sounds every bit up-to-date as he blasts off on the spaceship song "Cow Planet." And who would've thunk that actress Kate Winslet and novelty performer "Weird Al" Yankovic could pull off a sunny and theatrically emotive duet on "I Need a Nap?" There are no clunkers here; other highlights include numbers by Alison Krauss, Spin Doctors, Hootie and the Blowfish and Steve Lawrence and Eydie Gorme (hilariously singing the "Boring Song"). A knockout listen, in all the best ways, for the whole family. Like the songs, Boynton's book showcases her signature zippy sense of humor and loveable critters. It also includes complete lyrics and music for each number and brief profiles of all the performers. All ages.