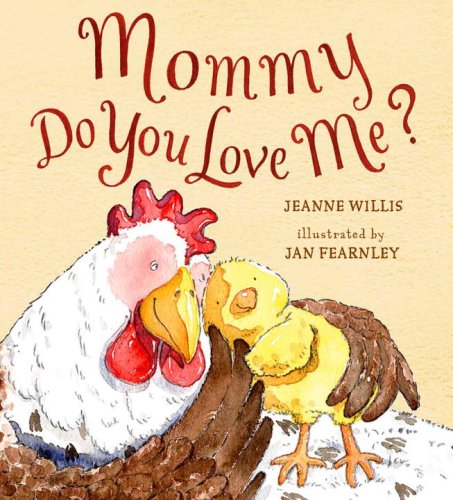 Mommy, Do You Love Me?

Through a series of tests—deliberate and not—a chick becomes almost totally convinced that his mother's affections are unshakable. Then, provoked by her son's almost manic cheeping, his mother momentarily loses it, and Little Chick is himself shaken. The mother hen repairs the breach with some unconditional reassurance (“Sometimes you make me mad, and sometimes you make me sad, but no matter what you say or do, I will always love you”) and with that surefire parenting trick, the funny face. Working in warm, translucent watercolors and velvety black outlines, Fearnley (previously paired with Willis for ) gives her characters an endearing depth of expression and personality. The hen's beady eyes beam with pride and bemusement at her spunky, downy offspring, and when the chick loses a race, his mother comforts him with a pat of her wing and a look that is fully empathetic even as it conveys “this too shall pass.” These highly individuated scenes of barnyard domesticity considerably buoy an otherwise predictable tribute to the constancy of mother love, while the large-scale watercolors on outsize pages let readers appreciate every nuance. Ages 3-up.