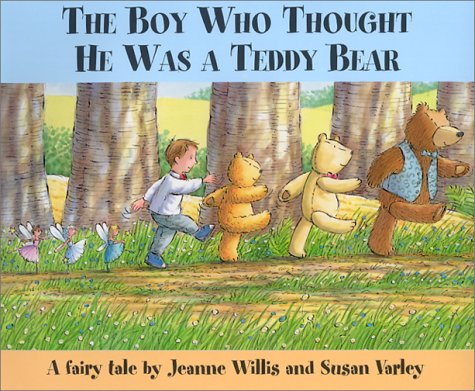 THE BOY WHO THOUGHT HE WAS A TEDDY BEAR

Being raised by teddy bears proves a cozy proposition in Willis and Varley's (previously teamed for ) endearing tale of a foundling child. At first, Big, Middle and Little Teddy are clueless—"He's hungry. Let's give him some sawdust," Big Teddy suggests. But a trio of forest fairies (visible in almost every picture) keeps watchful eye, and the bears' expertise in cuddling more than compensates for their gaps in knowledge. With a distinctly British briskness that tempers the story's sentimentality, Willis chronicles the boy's mastery of teddy bear skills (walking with swiveling legs, sleeping in cupboards, sporting a red bow tie). Varley's idyllic watercolors, tender without being cloying, depict his life as one big teddy bears' picnic. There's tension when the boy's mother finally finds him—"I don't want to be a boy!" he cries—but it's quickly quelled when Mom gives him "the biggest bear hug he'd ever had" and invites the whole gang to come home with her. The genuine sweetness of this story is hard to resist. Ages 3-7.