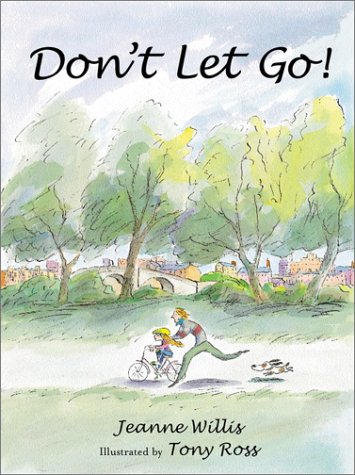 Learning to ride a two-wheeler is an indisputable milestone for kids, but Willis and Ross (previously teamed for ) mine it for even deeper emotional significance—with mixed results. Megan wants her father to teach her to ride her bike so she can "ride to you,/ From Mom's house over to yours." He agrees, and with the promise to his daughter that he "won't let go,/ Not until you say," she overcomes her last-minute fears: "I think I'm ready/ to go now, Dad./ Daddy, don't let go!/ Don't.../ Okay,/ you can let go now!" Set mostly in an urban park populated by cyclists of widely varying skills, Ross's fluid, editorial-style watercolors convey the heady sense of membership and mastery that courses through the novice cyclist (Megan imagines the park transformed into a path that winds past a tiger and a mandrill). But the book stumbles in the final pages, when Megan's achievement moves Daddy to tears. In the book's only close-up, the father's face turns a melancholy rose; as a teardrop descends his cheek, he makes the admission that "I was scared too today—/ Scared you would never come back to me/ Now that you can ride away." Megan calmly reassures her dad, but the ending makes the book into a sop to grownups rather than a triumph for Megan. Ages 4-8.