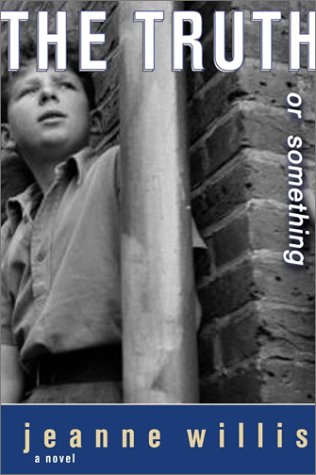 THE TRUTH OR SOMETHING

Convincingly adopting the voice of an adolescent boy, Willis () turns to the postwar '40s of her native Britain for the setting of this wry and wrenching first novel. The story begins as nine-year-old Mick and his mother move into a house by the sea to live with Harry; Mick is led to believe that Harry is his father, back from army service. Intentionally cryptic events that are later explained land the boy with Nan, his maternal grandmother, who is housing an assortment of other relatives. The author splices together humor and pathos as Mick learns the difficult facts about his family; in his words, "Nothing else can shock me, I don't think. I've been adding it all up. My mum's in the nick doing a stretch. My dad's not my dad. I've got a new older sister and a brother who's a Ted. I've got a little dead sister and a new baby brother who I haven't even seen and I've got more aunties and cousins than I know what do to with." But more shocks come when Mick goes to live with his biological father—he seems kind ("He asked me to stay. No one else did") but he molests his son. An impressively wrought cast of supporting characters emerges as Mick endures rites of passage both typical and atypical. Likely to appeal to adult fans of as well as sophisticated teens, this is a poignant, memorable tale. Ages 14-up. ()