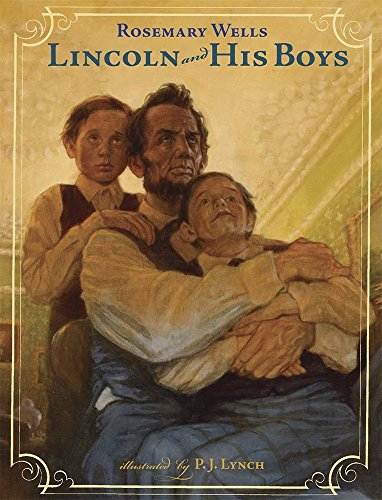 Lincoln and His Boys

Inspired by a 200-word fragment written by one of Lincoln's sons, Wells ( ) introduces the legendary president through the perspectives of his youngest children, Willie and Tad. Nine years old when the book opens, in Springfield, Ill., Willie accompanies his father to Chicago, where, as Willie puts it, “spiffed-up men with soft hands” decide that Lincoln should run for president: “It's a derby race, and I've got a plow horse's chance,” Lincoln tells his son. The family vernacular will win readers quickly, as will Lincoln's readiness to indulge his boys and let them see him at work. Darkness enters gradually: on the train to Washington, Pinkerton agents whisk Lincoln off, in disguise (“a lot of shicoonery,” he tells the boys), to foil an assassination plot; the outbreak of war grieves Lincoln; and then the death of Willie in 1862 devastates Mary Lincoln. Wells ends as Lincoln and Tad return from a trip to Richmond, Va., at the close of the Civil War, and Lincoln orders the Union band to play “Dixie.” Rarely does a biography so robustly engage the audience's emotions. Final art, in color, not seen by . Ages 8–12.