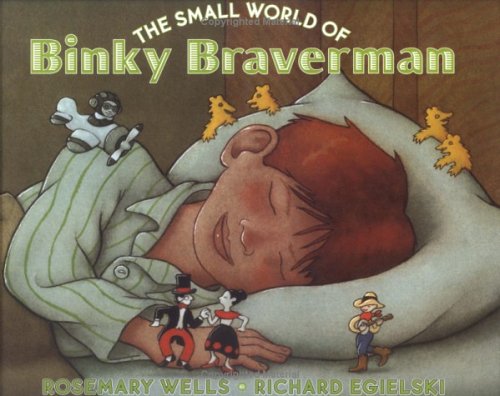 THE SMALL WORLD OF BINKY BRAVERMAN

In this book's magnetic preface, white-haired Stanley Braverman goes to pick up an inheritance from his late aunt. He finds his childhood clothes in the guest room of her empty house. "The pocket of a sailor suit still contained a wad of bubble gum. As the flavor swirled over Stanley's tongue, a forgotten summer flooded back as if sixty-five years was a wink on the smiling face of time." The Proustian gum takes Stanley back to 1938, when his parents, who are expecting a baby, send him to stay with his aunt in Memphis. But Stanley (aka Binky) prefers getting muddy in a rural swamp to wearing a suit and playing gin rummy. Late one night, Binky hears voices ("Oh, stay with us." "Yes, stay!"). Tiny characters, including the banjo player on a matchbox and the daredevil from a box of playing cards, have sprung to life to keep him company. Max and Ruby author Wells's plot strongly recalls Philippa Pearce's , in which another isolated boy accesses a miraculous world. Egielski's () sepia watercolors of the red-haired Binky, yellow-patterned wallpaper and old-fashioned kitchen and bath products reinforce the sense of a past American lifestyle. At the conclusion, Binky remains in the 1930s and leaves readers wondering about his 2003 self: having revisited his "small world," how does he awaken in the present day? This tantalizingly open-ended tale, especially its poignant introduction, explores the overlap between memory and imagination. Ages 5-8.