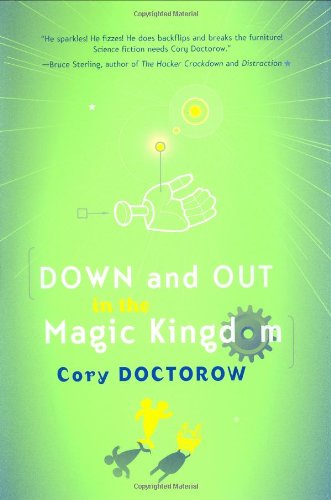 DOWN AND OUT IN THE MAGIC KINGDOM

A lot of ideas are packed into this short novel, but Doctorow's own best idea was setting his story in Disney World, where it's hard to tell whether technology serves dreams or vice versa. Jules, a relative youngster at more than a century old, is a contented citizen of the Bitchun Society that has filled Earth and near-space since shortage and death were overcome. People are free to do whatever they wish, since the only wealth is respect and since constant internal interface lets all monitor exactly how successful they are at being liked. What Jules wants to do is move to Disney World, join the ad-hoc crew that runs the park and fine-tune the Haunted Mansion ride to make it even more wonderful. When his prudently stored consciousness abruptly awakens in a cloned body, he learns that he was murdered; evidently he's in the way of somebody else's dreams. Jules first suspects, then becomes viciously obsessed by, the innovative group that has turned the Hall of Presidents into a virtual experience. In the conflict that follows, he loses his lover, his job, his respect—even his interface connection—but gains perspective that the other Bitchun citizens lack. Jules's narrative unfolds so smoothly that readers may forget that all this raging passion is over amusement park rides. Then they can ask what that shows about the novel's supposedly mature, liberated characters. Doctorow has served up a nicely understated dish: meringue laced with caffeine.