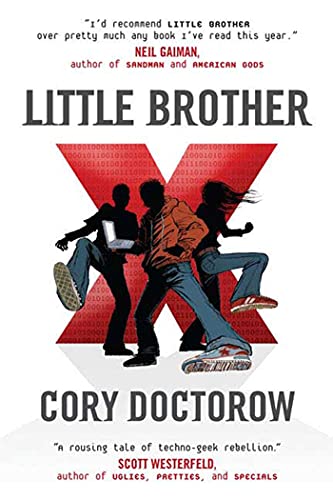 SF author Doctorow ( ), coeditor of the influential blog BoingBoing, tells a believable and frightening tale of a near-future San Francisco, victimized first by terrorists and then by an out-of-control Department of Homeland Security determined to turn the city into a virtual police state. Innocent of any wrongdoing beyond cutting school, high school student and techno-geek Marcus is arrested, illegally interrogated and humiliated by overzealous DHS personnel who also “disappear” his best friend, Darryl, along with hundreds of other U.S. citizens. Moved in part by a desire for revenge and in part by a passionate belief in the Bill of Rights, Marcus vows to drive the DHS out of his beloved city. Using the Internet and other technologies, he plays a dangerous game of cat and mouse, disrupting the government’s attempts to create virtually universal electronic surveillance while recruiting other young people to his guerilla movement. Filled with sharp dialogue and detailed descriptions of how to counteract gait-recognition cameras, arphids (radio frequency ID tags), wireless Internet tracers and other surveillance devices, this work makes its admittedly didactic point within a tautly crafted fictional framework. Ages 13-up.