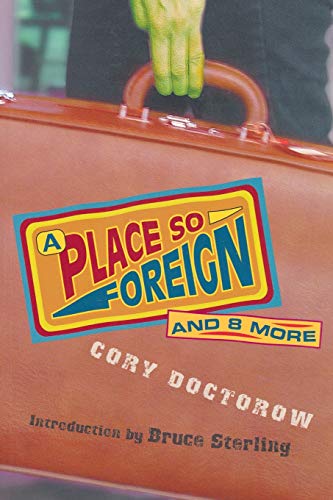 A PLACE SO FOREIGN AND EIGHT MORE

Postcyberpunk Doctorow, a rising Canadian SF star, follows his Orwellian (2003) with nine too-near-future tales of aliens and the human alienated—and it's often hard to tell the difference. In "Craphound," the author posits an Earth taken over by "bugouts," aliens obsessed with trading technological expertise for human junk, the ephemera that momentarily defines a society and then becomes silly or naïve when some new and more soul-destroying technological amusement arrives. That Faustian central metaphor of the thirst for technology as the ultimate source of spiritual corruption almost guarantees Doctorow's other absorption, his vision of Disneyland in "Return to Pleasure Island," a horrifying sidewise glimpse of the children's entertainment industry. Since the short story form seems somewhat restrictive for him, his best pieces, like his achingly funny reflections on adolescence ("The Year of the Hormone") and a Jewish superman in the era of the Pax Aliena ("The Super Man and the Bugout"), need at least novella-size room. His closing story, "OwnzOred," a shockingly original glimpse of 21st-century mankind tottering at the brink of a mortally steep cliff, is a polemic on fair-use freedom. By relentlessly exposing disenchanted Silicon Valley dwellers caught in a military-industrial web of khaki money, Congress-critters and babykiller projects, Doctorow explores the intersection of social concern and technology—Never-Never land, or 2084? (