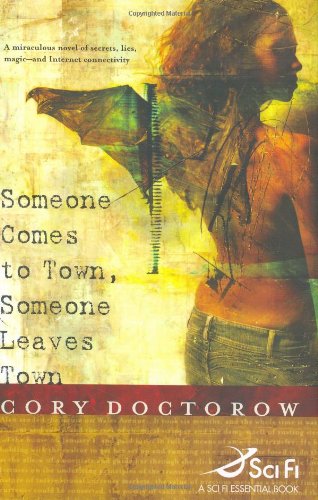 SOMEONE COMES TO TOWN, SOMEONE LEAVES TOWN

It's only natural that Alan, the broadminded hero of Doctorow's fresh, unconventional SF novel, is willing to help everybody he meets. After all, he's the product of a mixed marriage (his father is a mountain and his mother is a washing machine), so he knows how much being an outcast can hurt. Alan tries desperately to behave like a human being—or at least like his idealized version of one. He joins a cyber-anarchist's plot to spread a free wireless Internet through Toronto at the same time he agrees to protect his youngest brothers (members of a set of Russian nesting dolls) from their dead brother who's now resurrected and bent on revenge. Life gets even more chaotic after he becomes the lover and protector of the girl next door, whom he tries to restrain from periodically cutting off her wings. Doctorow ( ) treats these and other bizarre images and themes with deadpan wit. In this inventive parable about tolerance and acceptance, he demonstrates how memorably the outrageous and the everyday can coexist.