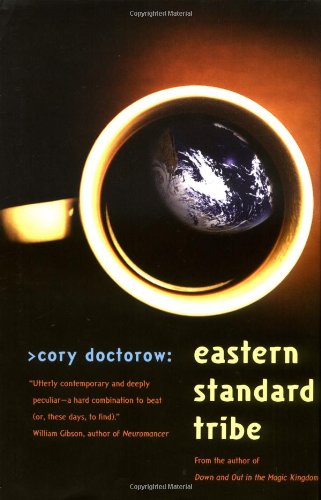 John W. Campbell Award–winner Doctorow lives up to the promise of his first novel, (2003), with this near-future, far-out blast against human duplicity and smothering bureaucracy. Even though it takes a while for the reader to grasp postcyberpunk Art Berry's dizzying leaps between his "now," a scathing 2012 urban nuthouse, and his "then," the slightly earlier events that got him incarcerated there, this short novel's occasionally bitter, sometimes hilarious and always whackily appealing protagonist consistently skewers those evils of modern culture he holds most pernicious. A born-to-argue misfit like all kids who live online, Art has found peers in cyber space who share his unpopular views—specifically his preference for living on Eastern Standard Time no matter where he happens to live and work. In this unsettling world, e-mails filled with arcane in-jokes bind competitive "tribes" that choose to function in one arbitrary time or another. Swinging from intense highs (his innovative marketing scheme promises to impress his tribe and make him rich) to maudlin lows (isolation in a scarily credible loony bin), Art gradually learns that his girl, Linda, and his friend Fede are up to no good. In the first chapter, Doctorow's authorial voice calls this book a work of propaganda, a morality play about the fearful choice everybody makes sooner or later between smarts and happiness. He may be more right than we'd like to think.